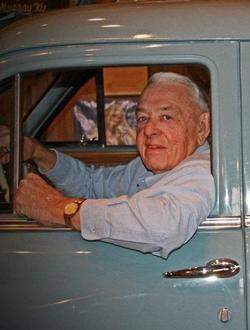 Billy Smith was born April 2, 1937 in Mayfield, KY to adoring parents, William Hal and Geneva (Brewer) Smith. As a young boy, Billy's favorite activity was spending time with his grandparents, Sam and Lois (Robison) Brewer, and Raymon and Gracie (Wrather) Smith on their respective farms in the Kirksey community of Calloway County. In 1951, Billy's parents sold their grocery store in Mayfield and moved the family to Kirksey to be closer to their families.
Through his years of school in Graves County, and later at Kirksey High School, Billy was interested in agricultural endeavors. He raised his first calf for an FFA project and rented land from his grandfather Brewer. As a sophomore and a leader in FFA, Billy raised and showed Herford cattle and began farming his own tobacco and corn crops. With his Ag teacher, Harvey Ellis, and best friend, Charles Coleman, Billy made several trips to the Kentucky State Fair showing his prized dark tobacco. In his senior year he served as president of the Kentucky FFA and was awarded the Kentucky Farmer of the Year. On numerous trips to Louisville, and national FFA meetings in other states, Billy became fascinated with traveling. He wanted more than anything to see other places in the world for himself. For a small town farm kid from rural western Kentucky, it was big goal. One night in 1955 when Billy, Charles and other boys were out cruising, they came across a few girls. Billy and Charles asked two of the girls for a date the following Saturday night. Billy drove and Charles opened the passenger doors as each girl took their respective seats. Billy's seat mate, Shirley Chilcutt, became his sweet mate, for life. They married in 1956.
Neighbors to the young couple, Noble and Jonnie Cox, encouraged Billy and Shirley to become involved in Farm Bureau. Billy was elected to the county board of directors and after a few years, elected president of Calloway County Farm Bureau. In time he was elected president of the American Farm Bureau Young Farmers Committee and later elected President of the American Farm Bureau Board of Directors. In 1957, Billy was awarded the National Farmer Degree. He and Shirley traveled to Kansas City, KS to receive it. There, they saw President Truman, one of three sitting presidents they were to see in their lifetime. In 1958, and again fourteen months later, Billy and Shirley were blessed with two children. Billy attended Murray State, but his passion was farming. He worked as a postal deliveryman and farmed. With a new family, Billy sought additional employment and found work with Hutson Chemical Company.
During the 30 years he worked for Hutson's, Billy sold rail cars and brokered barges with chemicals. He enjoyed the work and eventually was given an opportunity to work abroad. In 1972, Billy organized Ken-Lake International for Mr. Hutson, enabling the company to buy and sell internationally. With a fellow broker from Illinois, Bob Piper, Billy went to Amman, Jordan and bought the first ocean vessel of Muriate of potash that ever came into the United States.
Billy and Shirley sought new opportunities when Billy received a job offer that required a move to Kansas City, KS. Through this move and another that took them to Little Rock AK, the couple traveled around the world, twice. They visited places such as Singapore, Amsterdam, the Hague, Egypt, Australia, New Zealand, and attended the 1980 Winter Olympics in Canada.
After living away from their families for eight years, the couple finally returned to Kentucky in 1998, and lived in Eddyville until Billy retired in 2002, moving back to Calloway County and the Smith family farm. They continued to enjoy traveling for many years. In 2006, Billy and his son took a trip to Antarctica which ultimately helped him to achieve his goal. He was awarded the International Travel News Certificate of Achievement for having visited every continent in the world.
Billy is remembered by his family as a hard worker, wise and witty. He is cherished for his love of the family farm and being part of his grandchildren and great-grandchildren's lives.
Billy was preceded in death by his beloved Shirley, in 2015. He is survived by his two children, Billy Dale and his wife Debbie, of Murray, and Bobbie and her husband, Bill Bryant, of Louisville. Two grandchildren, Josh and his wife, Missy Smith of Murray, and Janae Smith and her husband, Brandon K. McCoy, of Benton, and two step-grandsons, Garrett Bryant of St Croix, USVI, and Landon and his wife, Amber Bryant, of Louisville, KY, survive, along with two great-grandsons, Logan Smith and Carter Smith of Murray. Billy's sister, Bettie, and her husband Gregg Stoll of Paducah also survives, as well as several nieces and nephews.
Blalock-Coleman & York Funeral Home, 713 South 4th Street, Murray Kentucky, is in charge of arrangements. Visitation is scheduled Friday, March 10th from 5:00 p.m. - 7:00 p.m. A committal service will be at the Funeral Home Saturday, March 11th at 10:00 a.m., conducted by Rev. Kerry Lambert and Rev. Jim Stahler. Private burial will be at Murray Memorial Gardens.
The Smith family extends their deepest appreciation to the caring staff at Hickory Woods Senior Living Center, and the Murray-Calloway County Hospital.