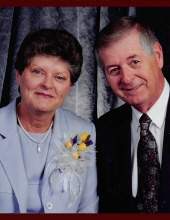 Born Monday, July 24, 1939 in , Marshall Co., KY, he was the son of the late Eugene Thomas "E.T." Fleming and the late Emma Francis (Carpenter) Fleming. He was the husband of the late Glenda Carol (Liles) Fleming. He was a retired Electrical Engineer with Air Products in Calvert City, KY. Bill was also a member of the River of Grace Fellowship Church, Benton, KY.

Interment will follow the service in the Murray Memorial Gardens chapel, Murray, KY.