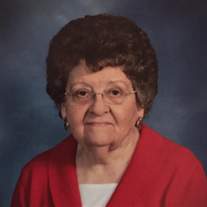 Mrs. Linn was born on December 19, 1925 to the late William Howell Starks and Mary Darnall Starks. During WWII, she worked for Hudson Motor in Detroit, Michigan making B29 bombers. Mrs. Linn was retired from Murray Calloway County Hospital Food Service and was a member of Glendale Road Church of Christ.

The family will receive visitors from 5-8 PM on Tuesday, September 20, 2016 at the funeral home.

Expressions of sympathy may take the form of donations to the Michael York Fund c/o Imes Funeral Home. Michael is the autistic grandson of Mrs. Linn.