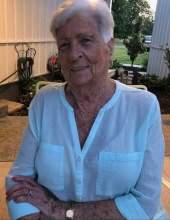 Tootsie was born in Marshall County on September 24, 1939 to the late Elbert and Della Edwards. She was one of the first waitresses hired at Hutchens BBQ where she worked for over 25 years. She later owned and operated 4 Little Pigs BBQ for 8 years. Tootsie loved to travel and visit the ocean. More than anything, she loved spending time with her children, grandchildren and greats. She was a member of Walnut Street Baptist Church where she helped to prepare meals and flowers for the sick and shut-ins.

She was preceded in death by her husband, Wayne Green; Delbert Taylor; one sister, Sue Reed; one brother, Bobbie Edwards; and grandson, Steven Morris.

The family would like to express their sincere thanks and gratitude to her special caregivers, Shawna Darnall and June Jones.

A funeral service for Tootsie will be held at 2:00 PM on Sunday, January 23, 2022 at Filbeck- Cann Funeral Home of Milner & Orr with Bro. Joel Frizzell officiating. Burial will follow at Murray Memorial Gardens.