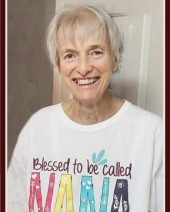 Born January 2, 1945 in Murray, KY, she was the daughter of the late Dewey Otto and Ruby (Poole) Parks. Mrs. Hargrove was a loving wife, mother and Nana to her family. She retired after 20 years of service with the Murray State University Library, where she worked in the catalog department. She was a graduate of Murray College High School and a member of Memorial Baptist Church in Murray, KY.

She was preceded in death by her parents, her son Charles Frederick Hargrove, and son-in-law Derek Pemwell.

Funeral services will be conducted Thursday, January 5, 2023 at 11:00 a.m., in the chapel of the Blalock-Coleman Funeral Home with Bro. Stephen Webb officiating. Burial will follow the service in the Murray Memorial Gardens, Murray, KY.

The family requests that memorial contributions be made to the Murray Calloway County Senior Citizens Center, 607 Poplar St., Murray, KY 42071.