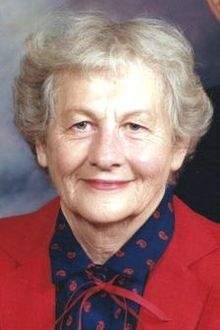 Ruby graduated from Morehead High School in 1948, "valedictorian of my high school class", then attended business college in Portsmouth, Ohio, where she met the love of her life, Talmadge E. Fannin, newly returned from World War II. They were married in Greenup, Kentucky, on December 29, 1949. She, her husband, and growing family, spent the next twenty years traveling and living around the world and the country in various postings with the military. After Mr. Fannin's retirement from the Air Force, the family moved to Panorama Shores in Murray, Kentucky, where Ruby lived until after the death of her husband.

She was a skilled homemaker, cook, and quilter, and was devoted to raising her three sons. She was a den mother in the Cub Scouts for all her boys, and a Sunday School and vacation bible school teacher. A member of Memorial Baptist Church, she was active in outreach ministries to international students and their families at Murray State University. She enjoyed being outdoors, planted a large garden as long as she was able, and was an avid fisherwoman and boater with her husband on Kentucky Lake.

Funeral services will be held at the J.H. Churchill Funeral Home in Murray on Saturday, March 25, 2017 at 11 AM, with visitation preceding from 9 AM until 11 AM. Dr. Jerrell White and Rev. Martin Severns will officiate. Burial will follow at Murray Memorial Gardens. Expressions of sympathy may be made to Memorial Baptist Church Kentucky Changers.

The family would like to thank the staff and volunteers at Alexian Village Heath Care Center and Alexian Valley Residence for their excellent and attentive care of Ruby over the past several years.

Online condolences can be left at, www.thejhchurchillfuneralhome.com