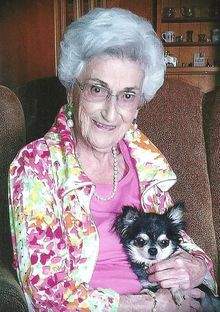 Mrs. Roberta D. Ward was born in Elmwood, Nebraska on Wednesday, May 2, 1923 to the late William Lee and Samantha Dyer. She passed away at the home of her daughter, Betty Jo Sanders, in Lumberton, North Carolina on Thursday, November 26, 2015. Mrs. Ward was a former resident of Murray, Kentucky.

Mrs. Ward retired as an assistant dietician at the Murray Calloway County Hospital and was a member of the First Baptist Church in Murray. She was an avid participant of the Murray - Calloway County Senior Citizen's Center in her retirement years.

In addition to her parents, Mrs. Ward was preceded in death by her husband, James Halton Ward, who died on May 4, 1997; four sisters, Iva Heckenlively, Lois Kahle, Mona Dyer and Fern Malrof; two brothers, Earl Dyer and Ernie Dyer; and one granddaughter, Shelly Sanders.