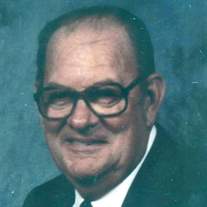 R.W., Jr. was born February 13, 1929 in Dover,TN to the late Robert (R.W.) and Gurthie Rumfelt Scarborough, Sr. He was a member of Walnut Grove Baptist Church and the Murray Masonic Lodge.

The funeral service for Mr. Scarborough is set for 1 PM on Friday, May 26, 2017 at Imes Funeral Home and Crematory, downtown Murray with Heath Mims officiating. Burial will follow in Murray Memorial Gardens.