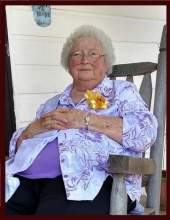 Born May 26, 1937 on her family farm “between the rivers” in Trigg Co, she was the daughter of the late Barney and Opha (Jackson) Futrell. Mrs. Pritchett was as avid quilter, spending many hours quilting with her friends and neighbors at the Hardin Senior Citizens Center, Hardin, KY. She was an Avon representative for over 50 years and was a member of the Dexter Missionary Baptist Church in Dexter, KY.

Funeral services will be conducted Wednesday, November 2, 2022, at 11:00 a.m. in the chapel of the Blalock-Coleman Funeral Home in Murray, KY with Bro. Glen Cope and Bro. David Little officiating. Grave side service will be held at Murray Memorial Gardens after the Funeral Service.