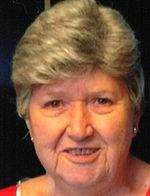 Lillie (Suggs) Adams of Sugar Grove, Illinois went peacefully into the loving arms of our Lord, Tuesday, January 16, 2018. She was born to parents Luther and Odell (Todd) Suggs of Lynn Grove, Kentucky on August 6, 1935 and became the devoted wife of Henry T. "Tom" Adams on February 9, 1952. She was blessed with sons, Tom of Sugar Grove and Todd (Deborah) of Ottawa. Lil was the cherished grandmother of Cassidy, Sydney and Cameron Adams whom she loved dearly. Lil valued time with the girls above all else and inspired them on so many levels.
Lil was an integral part of her Sugar Grove Community and the Sugar Grove United Methodist Church. Her long career at AT&T was a joy to her and she met regularly with former colleagues. After her retirement, she became a part of the Flaherty Family, providing support to the busy household while establishing a relationship of mutual regard that extended well beyond her years of service.
Lil became a caretaker of the Sugar Grove Community Building after the passing of her husband, Tom, continuing their legacy of service. She was the epitome of customer consideration and worked tirelessly to afford patrons access. Lil was instrumental in the development of the Sugar Grove Corn Boil. Worked several years at the legion Friday night fish fry's and a longtime member of the wandering foxes camping club. She was a member of the United Methodist's Women's Organization and the Sugar Grove Seniors. Lil held many board positions too numerous to list. In 2011, she was named Citizen of the Year for over 35 years of community involvement. Her fondest memories include summers spent on their houseboat in Corbin, Kentucky and extensive travel throughout the United States.
In addition to her immediate family, Lil is survived by a sister, Hilda Rowland, brother-in-law, Bill (Janice) Adams all of Murray, Kentucky. In addition, she leaves many nieces, nephews, cousins and dear friend, Mary Unterberg, to cherish her memory.
Along with her husband and parents, Lil was preceded in death by sisters-in-law, Christine (Herbert) Key, Louise (Almo) Bidwell and Robbie (James) Witherspoon.
Funeral services will be held on Monday, January 22, 2018 at 11:00 a.m. at the J.H. Churchill Funeral Home with Rev. Tim Palmer officiating. Burial will follow in the Murray Memorial Gardens. Visitation will be held prior to the funeral service on Monday, January 22, 2018 from 9:00a.m. - 11:00 a.m. at the J.H. Churchill Funeral Home.