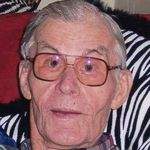 Mr. Henry C. Sanders, age 96, of the New Providence Community in Calloway County, died Wednesday, February 20, 2019 at Towne Square Care in Puryear, Tennessee.
Mr. Sanders was born in Calloway County, Kentucky on August 8, 1922 to Wm. Felix Sanders and Hettie (Wynn) Sanders. He retired from the Street Department with the City of Murray. Mr. Sanders enjoyed the outdoors; especially working in his garden and fishing, while sharing his produce and his catch with his neighbors.
In addition to his parents, Mr. Sanders was preceded in death by his wife, Dular "Jude" Sanders; four sisters, Mabel Wyatt, Alice Elkins, Opal Gibson, and Goldie Webb; as well as one brother, Charley Sanders.
Mr. Sanders is survived by two daughters, Burnette Lowe and husband Robert of Murray, Kentucky and Brenda Elkins and special friend Larry Weatherford of Murray; two grandchildren, Mechelle Elkins and husband Roger Garland and Mitzie Elkins all of Hazel, Kentucky; one great-grandchild, Jacob Garland; and a special niece, Doris Forsythe and husband Buddy of Buchanan, Tennessee.
A graveside service will be held in the chapel of Murray Memorial Gardens on Saturday, February 23, 2019 at 10:00 a.m. with John Dale officiating. Entombment will follow. There will be no public visitation.