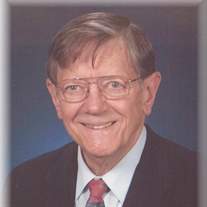 Mr. Everette Gene Barnett
May 25, 1930 - March 9, 2016
Everette Eugene "Gene" Barnett of Benton, KY, passed away March 9, 2016 at Lakeway
Nursing and Rehabilitation. He was a retired construction manager for C.F. Braun &
Company, Santa Fe International & Monenco, of Canada for 32 years. He served on
projects in the U.S., Canada, Kuwait, and a short time in Argentina.
He served in the US Air Force in Denver, CO during the Korean War period until he
became ill and was retired after a year of hospitalization.
He was married to Mary Lou Jones Barnett on October 10, 1953 for 62 years and 4
months. She passed away February 27, 2015.
He was a member of the First United Methodist Church in Benton, KY where he served as
Chairman of the Board, Chairman of the Trustees and sang in the choir. He was a 50 year
member of the Hardin-Berkly Masonic Lodge and a 65 year member of local 816 of the
IBEW in Paducah, KY.
He is survived by sons, Donald E. Barnett and David W. Barnett, brother Bobby D. Barnett
of Hardin, KY, several nieces, nephews, and cousins.
He was preceded in death by his parents, Ira Wilma "I.W." Barnett and Avice Henderson
Barnett and a brother, Earl W. Barnett.
Arrangements will be handled by Collier Funeral Home of Benton.
Funeral service will be held at 2:00 p.m. on Saturday, March 12, 2016 in the chapel of the
Collier Funeral Home, Bro. David Russell and Bro. Mark Stephens will officiate.
Burial will follow in the Murray Memorial Gardens.
Visitation will be held on Friday, March 11, 2016 between the hours of 5:00 p.m. and 8:00
p.m. at Collier Funeral Home.
Expressions of Sympathy may be given to the First United Methodist (new) Church
Building Fund, or the Helping Hands Food Pantry c/o First United Methodist Church, 845
US Highway 641 South, Benton, KY 42025.
Cemetery
Murray Memorial
Gardens
3223 US-641
Murray, KY, 42071
Events
MAR
11
Visitation 05:00PM - 08:00PM
Collier Funeral Home
P.O. Box 492 211 West 5th Street, Benton, KY, US,
42025
MAR
12
Funeral Service 02:00PM
Collier Funeral Home
P.O. Box 492 211 West 5th Street, Benton, KY, US,
42025
Comments
Dear Family & Friends of Gene Barnett,
May every consolation and blessing be granted to each of you in your deep sorrow.
My condolences and sincere sympathy, David 'Herb' Estes
David 'Herb' Estes - March 11 at 06:26 AM
It seems like Gene and Mary have always been part of our lives. Gene was my dad's
oldest friend and they worked together for many years. We met the Barnett's 52
years ago and have loved them ever since. Mary was the sweetest woman I've ever
known and her and Gene were so funny together. Their love for each other showed.
Gene was a kind and gentle man with a great sense of humor. I was blessed to know
him and I'm going to miss his emails.
Becky Hopkins
Becky Hopkins - March 10 at 04:58 PM
After Gene and Mary retired they moved in next door to us, they were the best
neighbors we ever had, after we moved away we kept in touch via cards and would
see Gene out and about. So sorry to hear of his passing he was such a sweet man. I
still have a blanket Mary gave me when we were neighbors I will cherish it always.
Our thoughts and prayers are with the family.
Marshall & Tonita McLeod
mcleod - March 10 at 11:04 AM
Cyndi Stephens lit a candle in memory of Mr. Everette Gene Barnett
Cyndi Stephens - March 10 at 09:58 AM
"
"
"
"
Kenny & Carolyn West lit a candle in memory of Mr. Everette Gene Barnett
Kenny & Carolyn West - March 10 at 08:34 AM
I have known Mr. B for 52 of my 59 years. He was one of the smartest and kindest
people I have had the privilege of knowing. He was even my boss when I was 19,
working as a timekeeper on a construction project that he was GM on. I think about
him often with fondness and will miss him.
Phil Knight
Phil Knight - March 09 at 05:55 PM
"
"