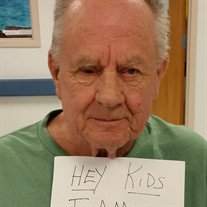 Billy was born September 27, 1942 to the late James Hugh and Earis Weatherford Burkeen. He was employed by Tappan until 1977. He was then employed by Greenfiled Bros. Tire in Marshall County, KY until 1982. He enjoyed taking his grandchildren fishing and on special trips and always loved having them close. He attended Palestine Methodist Church.

In addition to his parents, Mr. Burkeen was preceded in death by a sister, Linda Black and a brother, James W. Burkeen.